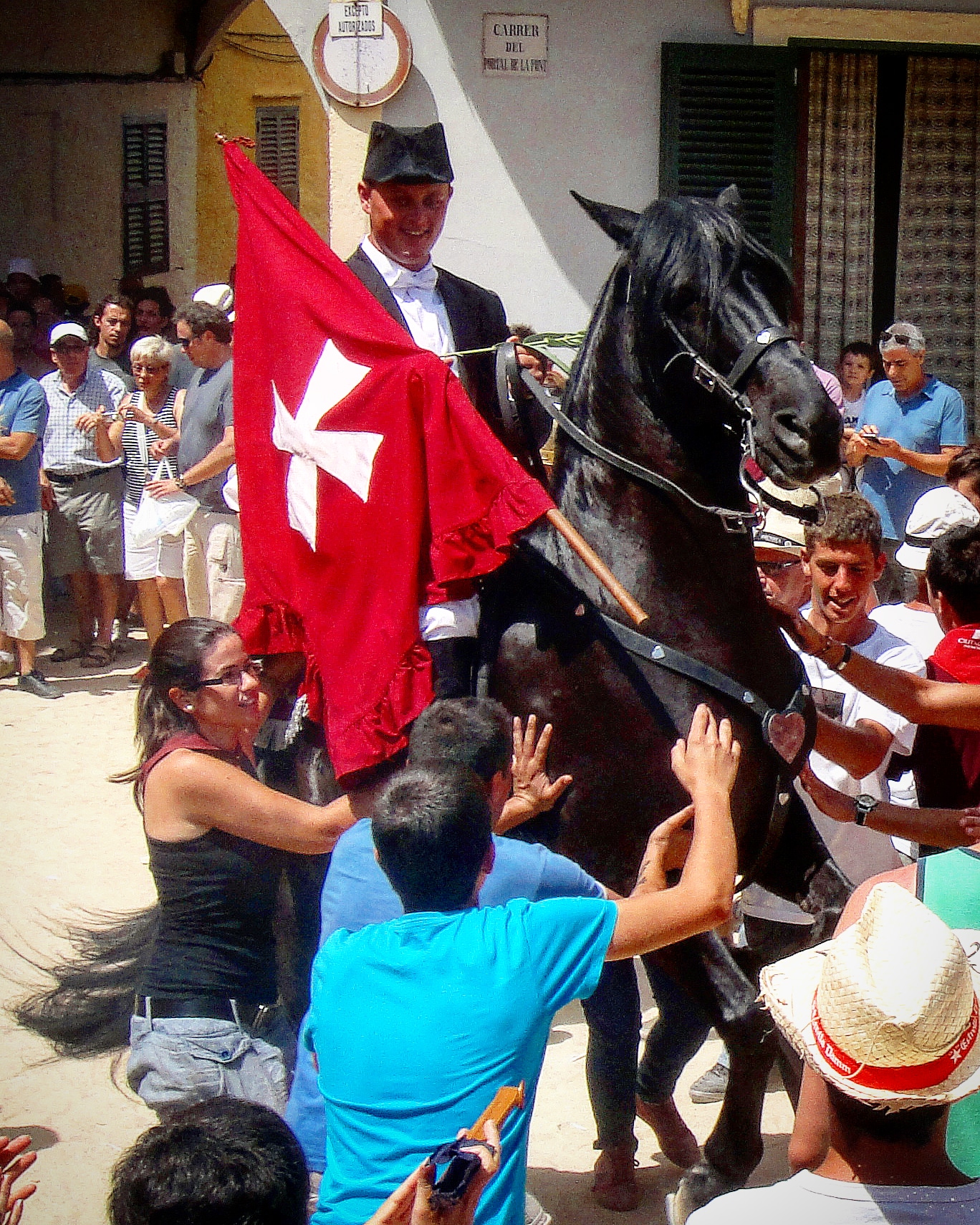 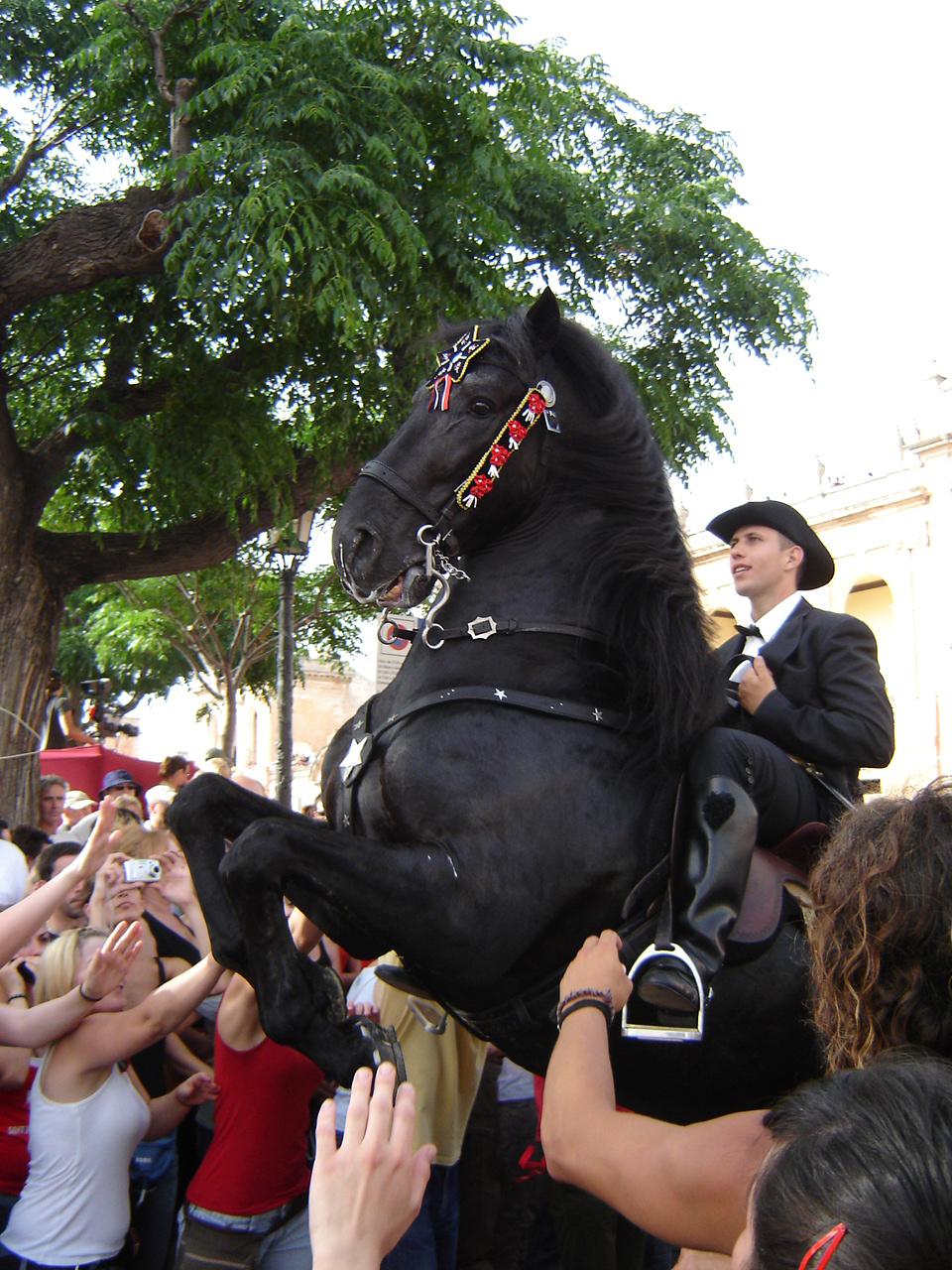 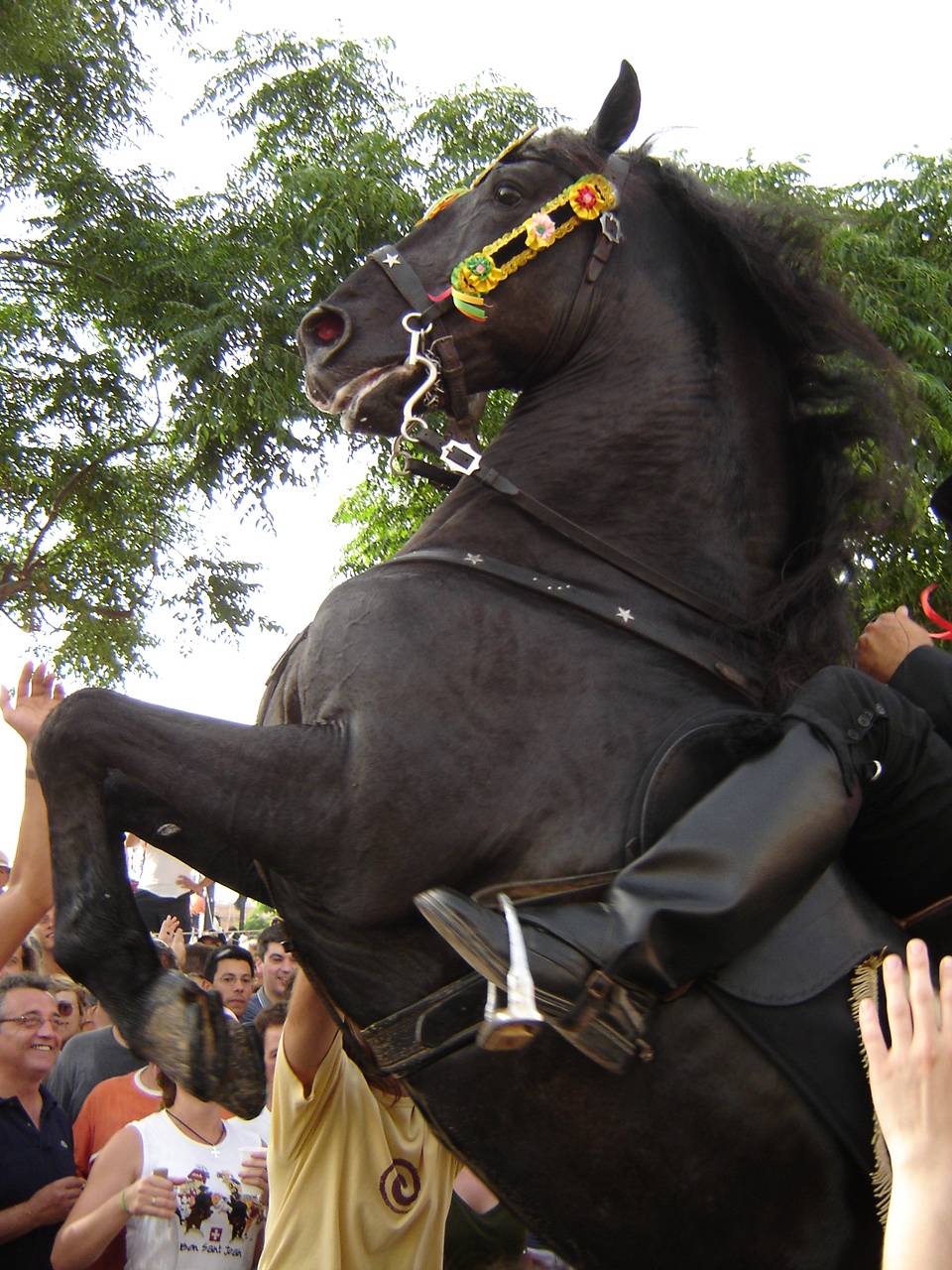 When June arrives, Ciutadella celebrates the most spectacular of festivals: Sant Joan.  The  horses are the real stars with their “caixers” (riders) who make their way through the fervent crowd.

The origin of the festival dates back to the beginning of the fourteenth century. At that time, Saint Obreria went on a pilgrimage on horseback to a small rural hermitage to honor his patron.

The caixers were the horseman who represented the social classes: church, nobility, artisans (teacher and apprentice) and peasants (farmers, one from the north and one from the south of the municipality).  The second group, the cavallers were the bulk of the cavalcade. They were called the qualcada and were comprised of countrymen of various ages from 7 to 70 years old.

The main stages and approximate times of the Festival are:

18.00h. Plaça des Born, where horses and riders demonstrate their skills and elegance to the rhythm of the «jaleo», the typical music of the festival;

The celebration of Sant Joan follows rigid protocols.  The performance is led by Caixer Senyor who must belong to the Ciutadellenca nobility. He is also the one who chooses the rest of the people who will form the Board of Caixers.  The only exception is the Caixer Capellà (priest) selected by the village priest.

The typical drink of the festival, as well as other festivals on the island, is gin mixed with lemonade.  In Ciutadella, they call this is gin amb llimonada. In all other towns, it is a “pomade.”

The Sant Joan festival has been celebrated for the last two centuries.

According to historians, the Sant Joan festival began in a brotherhood where the four tiers of the population were represented.  These social groups made up the Board of Caixers.

Thirteen years after the Reconquest of Menorca by the Castilian-Aragonese troops, in 1287, the bishop of the Majorcan diocese ordered the ecclesiastical restructuring of Menorca.

The historian Oleo made a mention of this document from 1456 referring to a commission destined for the hermitage of Sant Joan d’Artrutx (Sant Joan de Missa). This writing demonstrates the veracity of its ecclesiastical origin.

In 1564, the Obreria de Sant Joan Baptista was made up of an ecclesiastical worker, a gentleman worker, two peasant workers and a manual worker. In this way, the four sections of the population were represented.

The tasks preserving the hermitage were divided up into those collecting alms and administering the goods. Later, the person who would be in charge of transporting the banner of the brotherhood was added.

Every year in Sant Joan, a pilgrimage was held to the hermitage.  The penitents, their families and friends attended. The gentleman worker invited the assistants to a refreshment at his house and the priest did the same after dawn. On the way back, the pilgrimage ran through Ciutadella.

Over the years the, festival became more popular and more was added to it- including games of skill.

Today’s Board of Caixers is responsible for organizing the Sant Joan de Ciutadella festivities, as well as ensuring compliance with the protocols.

After the popularization of Sant Joan, the other towns also began to celebrate this type of festivities, in a similar way, but with some differences. One of the main differences is that, in all other towns, women can also participate in the “jaleo”.

In the jaleo, the caixers enter the town square and pass through the crowd demonstrating their skills and making the horses jump to the rhythm of the typical songs of these festivals, these songs are played by a local band and include a well-known jota in the region. The rowdy crowd makes the horses jump as a symbol of power and nobility.

In the other towns (not Ciutadella), the giants (very large wooden dolls) make a “pasacarrers” which dance and go through the streets until they reach the square where the band is playing.

Once the traditional “jaleo” of the second day is over, the canyes (plant) are handed over by the authorities. The caixers re-enter the square, making the horses jump and finally say goodbye. After the fuss and “ses canyes” have ended, the music band begins to play typical Menorcan songs.